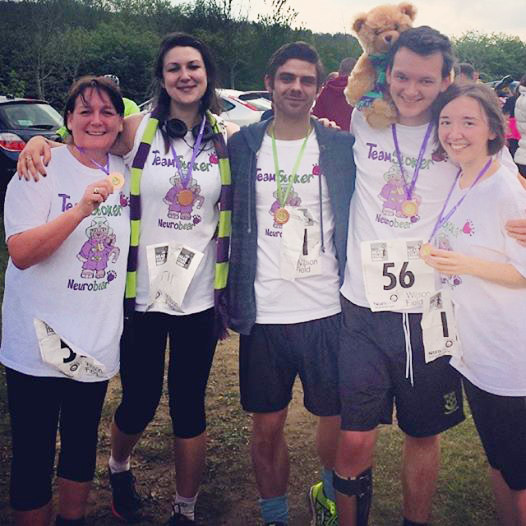 One inspirational runner this year at Head Start was Tom Stoker who was diagnosed with a cyst and rare brain tumour in January 2012. Due to the unique nature of his conditions he has undergone a total of seven brain surgeries, including an awake craniotomy in February 2013, as well as a six week course of radiotherapy.

Tom’s treatment has been successful; however, his condition and a series of seizures have left him with reduced mobility in his right side. This meant Head Start was an even bigger challenge. Tom said “it was pretty tough; I had to wear my orthopaedic boot and I wanted to carry Ned round on my shoulders so that was a bit of an extra burden!”

Tom braved the route with the rest of “Team Stoker” which included Tom’s mum Carol, his girlfriend Laura, Sister Rosie and Rosie’s partner John.
Tom said “It meant a lot to finally be able to get involved and give something back to a charity that has done an incredible amount, not just for myself and for my family, but for so many families in tremendously difficult circumstances. The response to our fundraising effort was spectacular, and I know first-hand that every penny will go a tremendously long way in changing the lives of those affected by neurological conditions.”

We were so thrilled to see Tom tackle Head Start and it’s always amazing to see someone recover so well thanks to the incredible work of the surgeons and hospital staff on the neuro wards. Thanks to all of you lovely supporters we are able to keep supporting those wards and continue helping people like Tom.