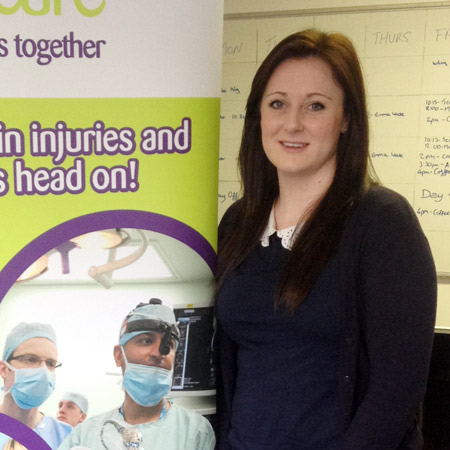 In November of 2012, 26 year old Emma Wade’s life was turned upside down when she was diagnosed with a brain tumour.

“I was suffering with really bad headaches which my GP just put down to stress. But they started to get event worse and I was in and out of the doctors for weeks. Eventually I was prescribed with anti-inflammatories which eased it temporarily.”

Emma’s GP referred her to the neuro department at Chesterfield Hospital for some reassurance tests. CT scans showed up something which was initially thought to be a cyst.

Emma was transferred to the Royal Hallamshire Neurosciences Department that same day for further scans where they confirmed that it was in fact a tumour. “I really couldn’t believe what I saw when they showed me the scan; the tumour took up nearly a quarter of my brain!.”

“I was told that I needed it removing as soon as possible but that it was very close to a main blood vessel and I was a risk of death. I couldn’t believe what I was hearing.”

Two days later, Emma was taken into surgery to remove the tumour. After a successful operation and a 6-day recovery on the wards, Emma was able to head home.

Unfortunately post-op complications resulted in a serious infection and Emma had to go back in for a second operation to have a shunt fitted which left her recovering for 6 months.

Now, 3 years later Emma is thriving as a healthcare assistant in Chesterfield Hospital and has been inspired to take on a nursing course which she starts in March next year.

“I definitely appreciate life a lot more and I’m just so glad I can continue enjoying time with my five year old daughter, Isla”

“The staff on the neuro wards at Royal Hallamshire are just amazing. I wouldn’t be here if it wasn’t for Neurocare and the funds they have put into the wards”