100% Outstanding!
Target achieved, but you can still help us! 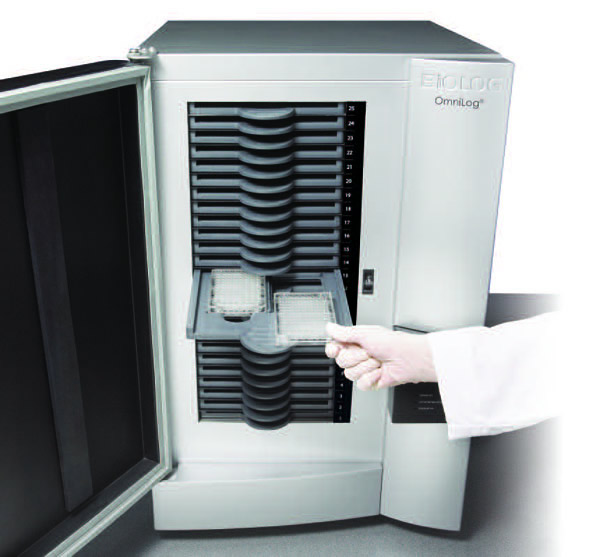 The Omnilog system allows researchers to metabolically profile multiple metabolic cellular pathway activities simultaneously in a single experiment, yielding highly valuable disease specific data in patient cells. The assay consists of 96-well microplates with pre-coated sets of 92 different energy substrates that are placed in the Omnilog, which then incubates and monitors the response of the live cells over a time course of hours to days.

Biolog the company who make the Omnilog system have developed proprietary dyes that allow real time measurement of the flux of energy production by cells. As cells produce energy in various assay wells, they simultaneously convert a dye forming increasing levels of purple colour that is measured and recorded by the instrument using a digital imaging camera. The amount of purple colour reflects the amount of energy the cells are producing. This extremely simple, sensitive, and reproducible assay can then be coupled to the measurement of hundreds of diverse cellular pathways in many important areas of neurodegenerative research. The Omnilog system not only automates the profiling process but also the data analysis process, allowing researchers to significantly increase the amount of experiments possible per day compared to using a traditional plate reader.

The applications of the technology are wide ranging, as well as measuring cellular energy production, the system can be used for cell viability and growth studies, chemical toxicology studies, detecting the effect of gene mutations on cellular function as well as bacterial identification analysis. From a neurodegenerative disease perspective, the Omnilog system can be used to functionally profile motor neurone disease, Parkinson’s disease and Alzheimer’s disease patient cell models, assess the effect of candidate drugs on cellular function and ascertain how the natural ageing process affects the metabolic profile in healthy people and how this changes in people with neurodegenerative disorders.