A group of young women raised a total of £2150 for Neurocare after discovering their mum had had a brain tumour for over six months and could have just weeks to live.

Bridgette Chandley, aged 58, from Rotherham, was diagnosed with a brain tumour in August 2018 after being convinced it was simply spondylosis or arthritis.

The brain tumour was discovered after an MRI scan – on the day of the MRI Bridgette found out the amazing news that her daughter Kate was pregnant but then the devastating news that she had a brain tumour.

At the Royal Hallamshire Hospital Dr Zaki, a Consultant Neurosurgeon at the Trust, explained that the tumour was the size of a golf ball and was located on the nape of her neck, pushing down on her brain stems which explained why she had been suffering with severe neck pain and struggling to walk, he was astonished that she was still alive.

Bridgette explained her thoughts throughout the ordeal: “The entire thing was simply awful, my whole life changed in the blink of an eye. I was in constant pain, I couldn’t walk but it was too painful to lie down, I couldn’t even see my grandchildren because it would have been too upsetting for them.

“The worst pain was at night when I tried to lay in bed, on the pain scale it was 10/10. It couldn’t have been any worse. It turned out that everyone has a pipeline of fluid from their brain to their stomach and so when I tried to lie down the tumour was pressing down and preventing the flow of that fluid.

“If it had stopped the flow completely I’d have died instantly.

“When I finally got the diagnosis that I had a brain tumour, everything just stopped. I think deep down I knew something was badly wrong but for someone to turn around and say I had a brain tumour was the worst thing ever, no one ever wants to hear those words.

“My husband had a holiday booked to go to Spain for months and he was due to go that morning, I convinced him to go and said it’s nothing serious and that I’d soon be back to my old self. He was in Spain for four hours before he had to fly back home. 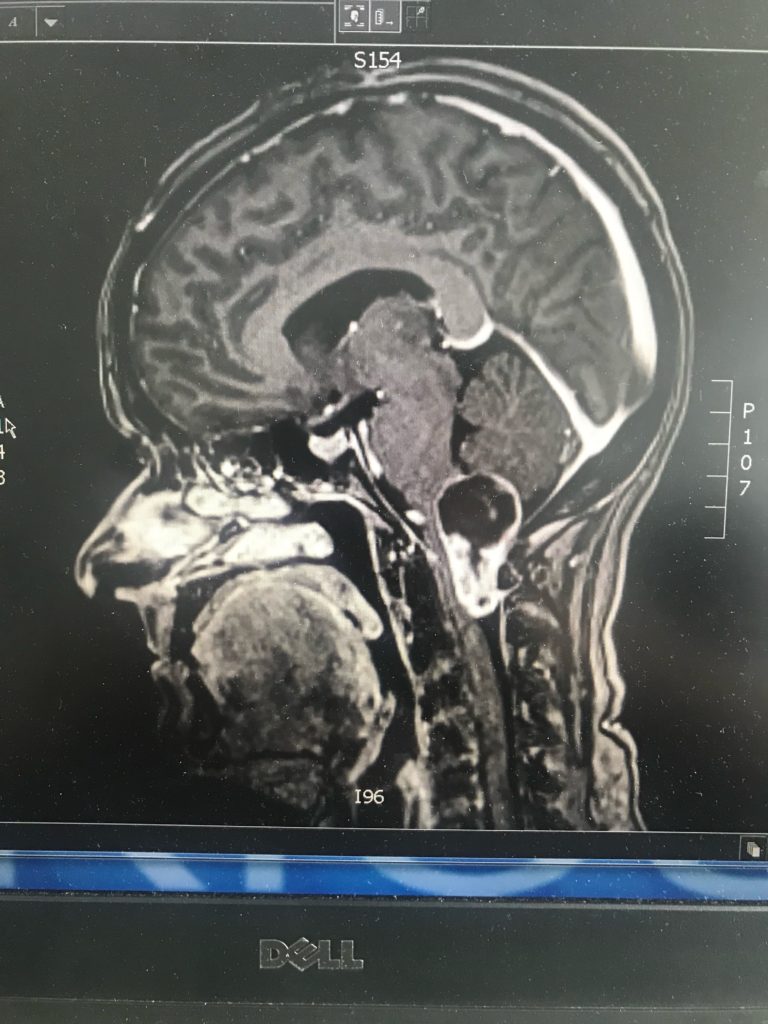 “Before the operation I had a decision to make, the location of the tumour was pressing down on my brain stems which control your ability to walk, talk and swallow – Dr Zaki asked if I wanted to have the entire tumour removed, or remove some of it and have radiotherapy to get rid of the rest.

“Straight away I said I wanted it gone, I didn’t even consider losing all those abilities because well, I can just relearn them, whereas I knew I wouldn’t be able to live knowing there was still a tumour inside me.

“I suffer with anxiety and all everyone has said to me is that they don’t know how on earth I got through it, neither do I. It was horrendous, but I knew I had to do it as the quicker I got on with it, the quicker I could get on with my life again.

“But it wasn’t just that, I lost my mum last year and I know how it feels watching your mum laid in hospital, so I knew I had to be strong for my children. The thought of not being able to see them again or meet my new grandchild was something couldn’t even think about.

“My daughters never left my side during my stay in hospital, they were there from 8 in the morning until 8 at night, they would have come into theatre with me if they could, they came in and pampered me, they did my hair, make-up, nails anything to keep a smile on my face.”

Rebecca added “Mum was really lucky, at the time she was in hospital there was a student nurse called Eleanor who she became quite close with. Eleanor was with mum through it all even the operation.

“Part of Eleanor’s degree included having to watch someone having surgery, which meant the world to all of us, it meant mum had a friendly face by her side the whole way through.

“The operation lasted 6 hours and then my stepdad got the phone call and his exact words were, ‘the operation couldn’t have gone any better’.

“When we saw them bring mum out on a stretcher with Eleanor by her side, mum took her mask off straight away and said ‘Can I have a wine yet?’. For her to have woken up and be cracking jokes was such a huge relief.

“Then we had to wait until the Friday to find out if the tumour was cancerous or not, and I will never forget that feeling, the fear that it still might not be over and things could get even worse.

“Four hours later we found out the tumour was benign and I just saw mum burst into tears instantly, just the thought that it was cancer that could have spread was a thought not worth thinking about, and from then on things just got better.

“The whole thing was so surreal, it all happened so quickly and I still to this day can’t believe what happened. Everyone in the Hallamshire was lovely, even the cleaner and the tea ladies, they always made conversations with you and asked if you were ok and took a genuine interest in you.

Bridgette added: “I can’t even put into words how thankful I am, I could thank them a million times and it still wouldn’t be enough, they saved my life, they are simply amazing, which is why as a family we wanted to give something back.

“The ladies night was incredible, Eleanor even surprised me and turned up with her mum on the night which was such a lovely thing to do. It was a night full of smiles, laughter and fun and I’m so grateful to be here and I can’t wait to keep making more amazing memories.

“I’m back to my normal self now, I do get anxiety if I get a headache and panic but I think that’s normal. I had my MRI scan last December and the doctor is confident it’s gone for good.

“I appreciate the little things so much more now, I remember picking one of my grandkids up without even thinking about and Rebecca looked at me and was like ‘Mum you’ve just picked him up –you haven’t done that for months’, and it was just a beautiful feeling.

“I honestly don’t know what I’d have done without the team at the Hallamshire, they gave me my life back and for that I’ll be forever grateful, and the ladies night was just one of the ways we plan to say thank you by raising funds for Neurocare.”

To support other patients like Bridgette being treated in Sheffield go to neurocare.org.uk