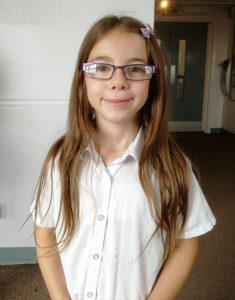 Raven Wild, from Wybourn, has raised an incredible £420 after her Nan, Barbara Lazenby (61) was treated for a brain aneurysm five years ago.

Raven planned the chop years before, growing it to the exact length so she could donate it to the Little Princess Trust, while raising funds for Neurocare at the same time.

Raven’s Mum, Rachel said: “Mum had been suffering from headaches for a couple of days, but none of us thought anything of it. Then early one morning, my dad, Stuart heard her collapse onto the floor of the landing. He jumped out of bed to see if she was ok and phoned for an ambulance.

“By the time she arrived at the hospital she was virtually unconscious. Doctors ran tests, and that’s when a bleed was found on her brain. We’re a close knit family and were all so upset. Mum woke up the next day and seemed better. The surgeons explained that she would need an operation to fix the aneurysm which caused the bleed.

“She then spent almost eight weeks in hospital, where she was asleep or unconscious most of the time, very rarely opening her eyes. All of us took it in turns to phone regularly to see if there was any news, as well as daily visits. Then she just woke up, it was brilliant to see her awake. She spent another few days on the ward, and then was transferred to the Renal Unit at the Northern General Hospital, as her kidneys were losing function.

After nine weeks she was finally home.

“After nine weeks in hospital, she was finally home. It’s been a slow recovery, but she fought it every day to come home with us.  We then cared for her until she was back on her feet. The aneurysm has affected her lymph nodes so she is now disabled and partially blind in one eye.

“Her care throughout was fantastic. So much so that Raven decided to raise funds for Neurocare, to say thank you to the staff that saved her life. Raven and her Nan are very close, they like going shopping together and drawing pictures for her. My mum cried when Raven told her that she was raising funds. She was over the moon.

“Raven loves her new hair. Were extremely proud of what she’s done, given up, and the money raised. It’s fantastic.”

Neurocare works to improve the lives of people affected by brain injury and disease. To donate funds to improve the care provided to patients visit https://neurocare.org.uk/donate-now/